What’s in a name? Previously The Newe Inn, The Ounce, and The Cat, The Dorset Arms has been an inn for over 500 years.

There was a building on the site from much earlier times, demonstrated by the long portland behind, and what commendable foresight the medieval town planners showed with their land arrangement! Originally to allow the owners to be self sufficient in food, it has since ensured ample space for stabling, carriages, motor garaging and car parking. 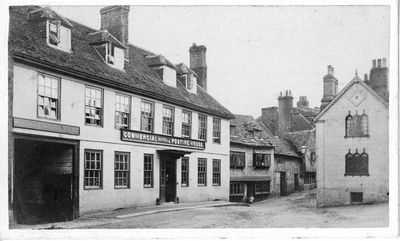 The Dorset’s fortunes have been closely bound with those of the town, notably the coaching trade, which started in the fifteenth century. The longest and oldest route to Brighton went via East Grinstead and Lewes. Coaches stopped at The Cat Inn, and its enterprising landlord put specially struck farthing tokens in customers’ change, to encourage return visits: an early form of loyalty scheme.

The coaching trade’s expansion was severely hampered by the terrible roads. The Government’s solution was turnpiking, whereby a charge was levied on travellers, at toll gates, to generate income for maintenance. The East Grinstead to Lewes road was turnpiked from 1717, and by 1762, the charge was 6d, around £11 today. How outrageous, the Dartford Bridge toll charge is only £2.50.

Ye Dorset Arms now prospered: it had the Post, as well as passenger travellers, and new local routes started and finished there. It was advertised in coaching guidebooks and regularly patronised by illustrious persons, including politicians, aristocrats and royalty, many of whom stayed there on their way to see the Prince Regent in his Brighton home.

In 1841, the railway service from London to Brighton brought this era to an end, but The Dorset Arms soon found new custom from the motor and coach trade. In 1903, it was noted as a fine house, whose landlord took a great interest in its history. In the 1920s, its signage announced that it was “For Families and Gentlemen”, replacing the earlier “Commercial Hotel and Posting House”. The Horse and Carriage Yard had become The Motor Garage, and the building had an AA plaque. In 1947, William Luscombe wrote that it combined an old fashioned charm with really modern amenities. 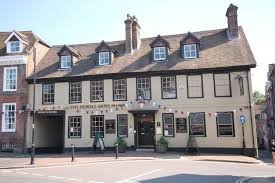 In the 1960s and 70s, the Dorset was a favoured place for local young people to meet at weekends – I have slightly hazy personal memories of this – in those days, you could still see over the Ashdown Forest from the balcony.

The owners of The Dorset have shown a remarkable aptitude for keeping up with the times, and it remains a popular eating and drinking place today. Further continuity with the past is provided by Wetherspoon having thoughtfully called their local branch The Ounce and Ivy Bush, reviving the connection to the Earl of Dorset’s coat of arms, which features two leopards, an animal formerly known as an ounce. And, one of the Cat tokens, from 1650, and two toll tickets are in the museum’s collection.

Additional sources: Coaching Days and Coaching Ways by W. Outram Tristram 1903; A Book of Inns by William G Luscombe 1947. And with thanks to Dorothy Hatswell.

Your ticket for the: Ye Dorset Arms at East Grinstead