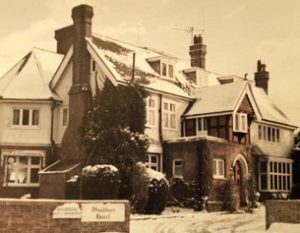 I have such fond memories of The Woodbury Hotel. My parents owned it during the nineteen seventies and, although I was largely away at university –and later drama school – I remember many happy times spent within its beautiful walls.

My parents bought the hotel from a Mr and Mrs Benbow… he a descendant of the notorious admiral… and they inherited nine permanent residents. When dining together, they reminded me of nothing less than a scene from an Agatha Christie novel! There was Wing Commander Phillips, former ADC to Edward V111, Duke of Windsor; Mr and Mrs Tate, of the sugar dynasty; the sister of wartime hero Lord Dowding; Miss Tennent, sister of fabled theatrical producer H M Tennent; Mr Volk, of the famous Volk’s Electrical Railway family; a rather grand lady called Mrs Capron and two solicitors: Mr Shepherd and… the baby of the family… Mr Stevenson. This eclectic group inhabited a separate wing of the building and rarely mixed with the other, non-resident guests.

As the hotel grew in reputation, these non-residents came from all over the world. Notable among them were members of the celebrated Guinea Pig Club, visiting East Grinstead for their marvellous reunions. Indeed, the renowned plastic surgeon Percy Jayes, protégé of Archibald McIndoe himself, lived just across the road at Barton St Mary, and many of his patients came to stay at the hotel prior to their surgery. Incidentally, Barton St Mary is fascinating in itself. The house was partly designed by Edwin Lutyens, with a garden by the great Gertrude Jekyll, and the gatehouse is visible from the Woodbury just across the Lewes Road. The Jayes children went into the theatre, like me, and the West End musical director Catherine Jayes is, to this day, my very firm friend!

The Woodbury was an intriguing building. It had been the Belgian Embassy during World War Two and housed substantial pieces of antique furniture and Chinese pottery. As my own reputation grew in the theatre, it hosted many theatrical luminaries at marvellous parties and rarefied receptions. But the thing I remember best of all were the times when the hotel closed at Christmas. Then you could wander its empty confines… spaces where one normally spoke in hushed tones – but now you could shout! – and the place became an actual“home”. The Woodbury Christmas parties became the stuff of legend. Twenty people sitting down for dinner followed by the most elaborate of games. With its nooks and crannies and hidden alcoves it was perfect, for instance, for Murder In The Dark! A regular guest at these events was the theatre director Wallace Douglas, well-known for many a West End musical and all of the Brian Rix farces. Wally lived just down the road. All-in-all, it was quite a theatrical corner of town!

I have to be honest, I hate to drive past the Woodbury now. The flats it has been converted into are perfectly lovely, I’m sure, but where has the Woodbury gone? Into memories, of course – mine and a whole host of others.

Warner Brown is the writer of WALKING WITH DINOSUARS – THE ARENA SPECTACULAR amongst other musicals and plays.

Your ticket for: THE WOODBURY HOTEL