The Hucknall Estate, Excerpt From an Article by David Gould

The Hucknall Estate, a small corner of East Grinstead, tucked away behind the railway station, was an investment of coal merchant William Best, who transported coal from Hucknall near Nottingham. It consists of Grosvenor, Crescent & part of Park Roads.

Best bought Killick’s, or Copyhold, Farm, whose land had stretched to the bottom of West Hill, in 1903. The farm building was unsafe, so was demolished. The western half of the land had been brickworks.

He sold most of the land at 10 shillings a frontage foot in 1905, keeping responsibility for drainage, etc. Building started in Grosvenor Rd. He retained some land next to Park Rd, and on it he built shed, stables and barn for furniture van, horses, carts. He moved into no. 7 Grosvenor Rd.

William Best & Son was founded in 1887. The shop and house were at 176A London Rd, corner of Station Rd. Best dealt in coal, furniture, corn, transport including water carts.

From 1909 to 1932 he had a steam tractor. He had two coal wagons, going in opposite directions, with use of a wharf at the station for 3 days. The journey to or from Hucknall took two days. In 1974 the business was sold because the use of the station wharf was lost on the construction of the inner relief road.

Park Road and Chapmans Lane are part of the prehistoric trackway between Lewes Rd and Crawley Down. They were previously called Imberhorne Lane or Road.

This article is written by Roy Adderley and based on an article by David Gould in the East Grinstead Society’s newsletter. 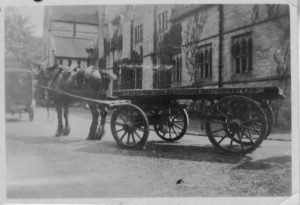 Your ticket for the: The Hucknall Estate, Excerpt From an Article by David Gould

The Hucknall Estate, Excerpt From an Article by David Gould