This Spring, we have been joined by Masters Student Isabel Pace, who has been researching stories about the Guinea Pig Club as part of her remote placement at the museum. She has researched the role of nurses, based on the work of Liz Byrski who interviewed nurses who worked with the Guinea Pigs in 2007.

The Lost Role of Nurses

At a time when conversations about the value and national contribution of nursing are more pertinent than ever, I looked back at the work of Liz Byrski, Australian broadcaster and writer, and her pioneering work reclaiming the voices of the nurses on Ward III at the Queen Victoria Hospital.

The uplifting accounts of McIndoe and The Guinea Pig Club fill much of the archives at East Grinstead Museum and are often comparable in tone and nature. This is possibly the effect of having recounted these experiences so often, but also perhaps the remains of Archibald McIndoe’s own ethos, of ‘sticking together’. Whilst having a deep respect for the psychological and surgical innovation undertaken by McIndoe; the stories of heroism, stoicism and dazzling surgical reconstruction rarely feature women at their forefront. History has, understandably, washed over the stories of these women, in favour of recognising the valour and determination of these war heroes and their mighty leader, or ‘Maestro’. 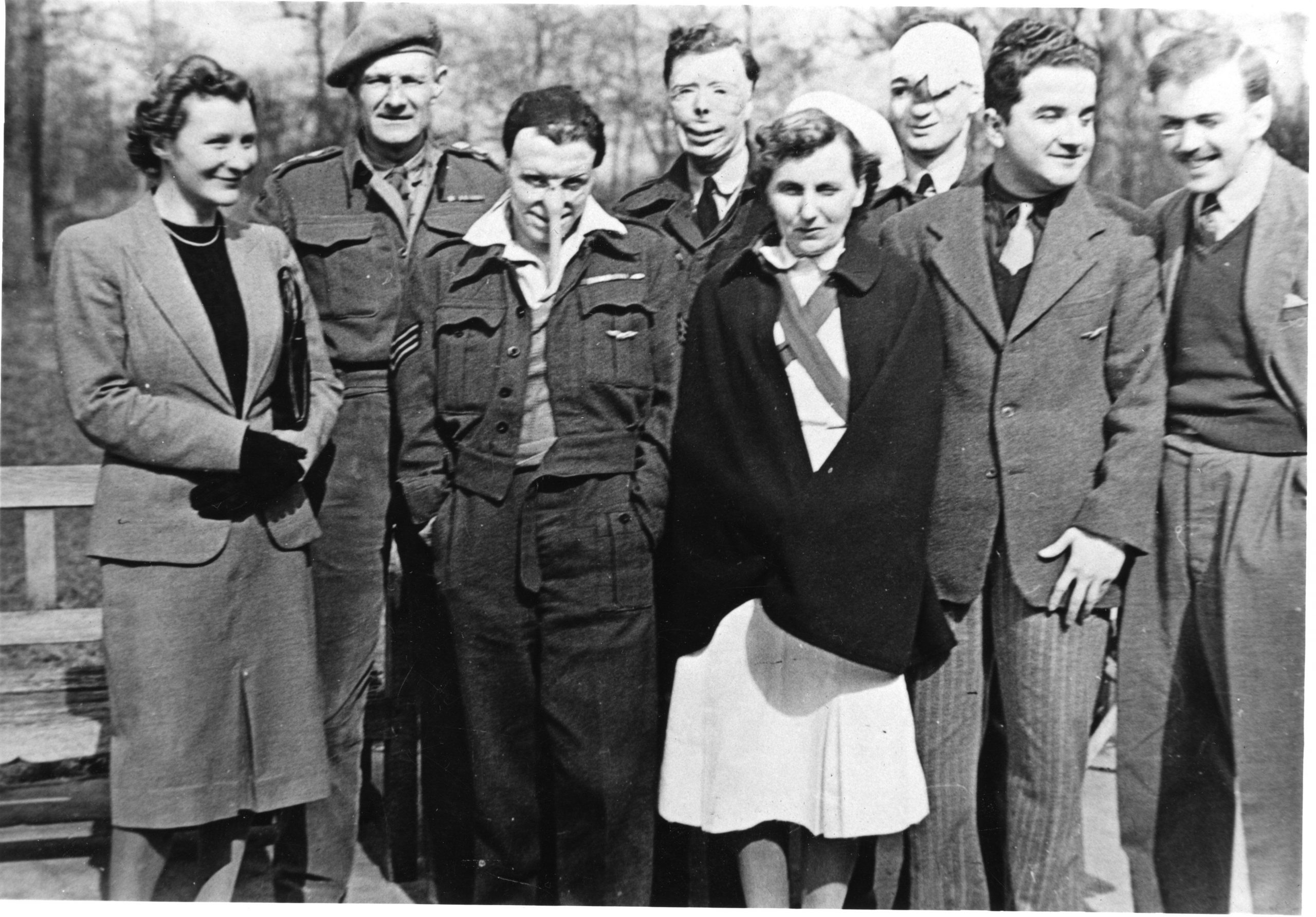 In 2007, Liz Byrski was able to trace and interview women whose recollections of life on Ward III had not been recorded. In completing these interviews, Byrski was faced with a reluctance by contributors to critique the unique professional standards introduced by McIndoe on Ward III at the Queen Victoria Hospital (QVH). Although beneficial in rehabilitation, Archibald McIndoe’s unconventional regime of treatment threw out the rule book by encouraging nurses to establish friendships and relationships with the patients. This was a dismantling of the typical boundaries involved in nursing and led to experiences that are at odds with public memory. Out of the twelve women interviewed by Byrski in 2007, only one was comfortable with being named.

One of the women, ‘Joyce’, after describing her experience to Byrski confessed, “I’ve never talked about it… it seems disloyal to the men. I don’t want anything that… that makes them sound bad.” Its also worth noting that a lot of the evidence gathered by Byrski appears more harrowing with 21st century eyes.

A woman’s role in pre and post war Britain was designated to caregiving, as well as conforming with beauty standards as part of a national drive to ‘keep up appearances’. J. B. Priestley (1894-1984) coined the phrase ‘beauty is duty’ in defining a woman’s wartime role; the beautification of nursing in recruitment posters makes this issue specific to the profession. 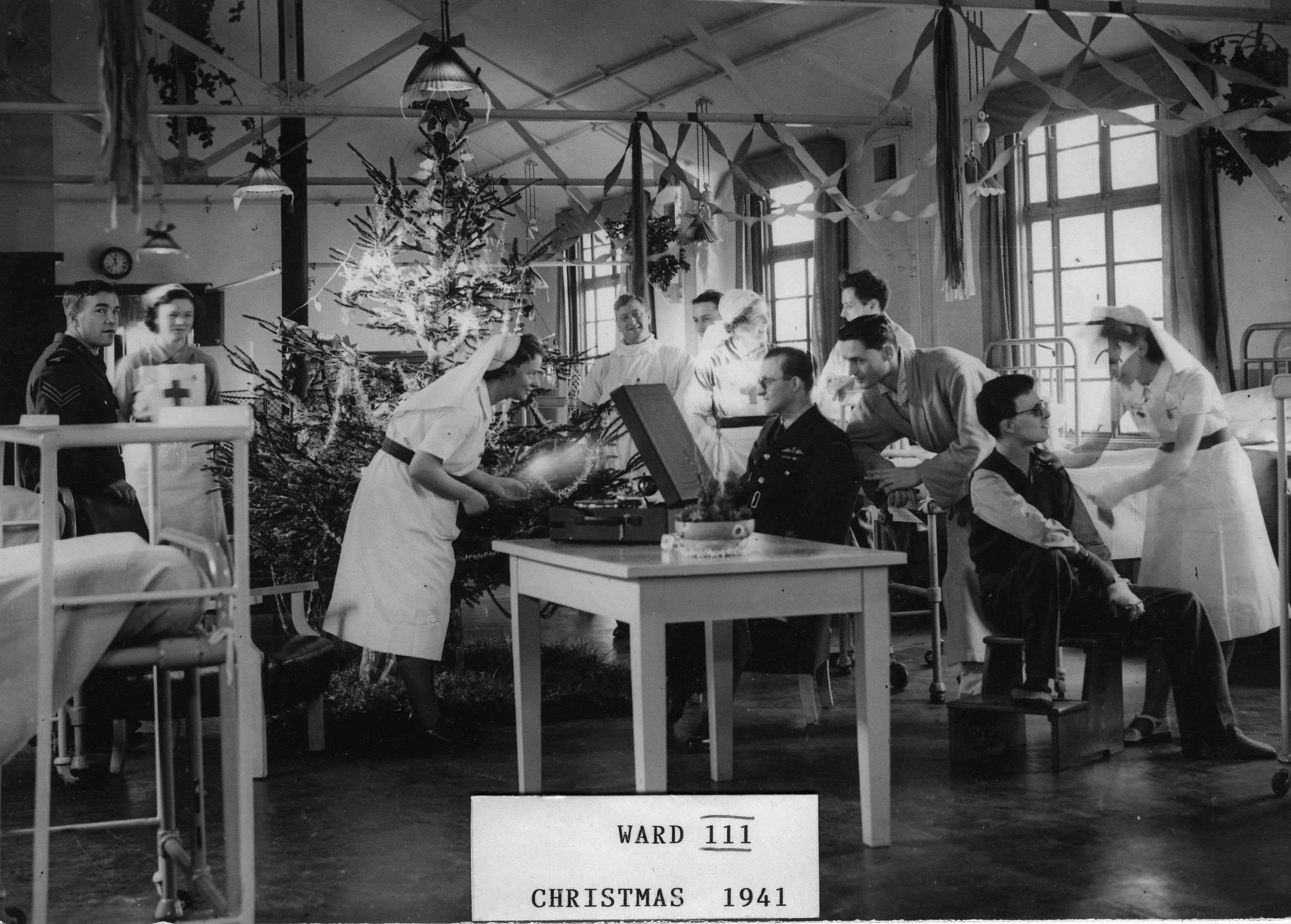 Nurses on Ward 3 at Christmas

‘Gladys’, a twenty-six-year-old experienced nurse, told Byrski of the unconventional environment at QVH, “Boundaries- He-Mr McIndoe- dissolved them all and so some women were coerced into things they didn’t want to do.” In his desire to restore the men’s self-esteem, McIndoe created an environment of heightened masculinity.

As Jack Toper, veteran and member of The Guinea Pig Club told Byrski, “Human beings can adjust to anything if they are given the right sort of environment, that’s what he gave us.” It was clear that McIndoe saw female presence as vital to masculinity.

Vanora Marland, McIndoe’s daughter described what her father wanted in a nurse, “the sort of women who wouldn’t make a fuss about having their bottom’s pinched… he thought having beautiful women around to flirt with was good for them and he encouraged it”. In Liz Byrski’s research, there are countless testimonies that describe “quite a lot of sex going on” or, as Guinea Pigs Bill Foxley and Ray Brook  describe, “‘knee tremblers’ in the linen rooms… unscrewing the light bulbs in the hospital box”.

It is important to point out that there is no suggestion that the women that worked on Ward III were explicitly forced to engage in intimate relationships with the patients. However, there was a pressure to ‘do that bit extra for the war’.  In this way, many of the nurses seem to have felt it was their national duty to grin and bear it, “some days I just didn’t want to go to work because of what they’d do. But it was the war, that’s what the girls said.”

In the testimony of Margaret Chadd, an almoner at the hospital, an exchange between McIndoe and the Matron is described in which McIndoe berates her for complaining about the treatment of the nurses, “these men have had to put up with a hell of a lot, so surely you and your staff can put up with a little of their nonsense”. In this way, the pressure on women to embrace uncomfortable relationships with their patients was engrained in the fabric of the hospital.

In conducting my own research, it was difficult to find primary material that corroborated the specific events described by the women Byrski interviewed. However, in oral history interviews conducted with the Imperial War Museum, Helen McAlpine, a former VAD working at East Grinstead, told a tale about a new nurse being asked to ‘fill up a bottle’ and upon reaching out for the man’s hot water bottle finding something ‘entirely unexpected’. It cannot be assumed that this behaviour was confined to Ward III. However, the difference in this case was the lack of boundaries between the patients and the nurses.

At the onset of war tensions in the nursing profession mounted between senior nurses, who had taken difficult nursing exams to enter the vocation, and ‘untrained’ nurses, who were regarded as less competent. To counteract this, boundaries were being reaffirmed and professional practice set with strict nursing protocol. It is unsurprising, therefore, that the nurses interviewed by Byrski were universally stunned by McIndoe’s alternative rehabilitation methods. To highlight Ward III’s unconventionality, Byrski discovered a tale of a nurse in Tunbridge Wells who was pushed through an open window by her Matron having gone on a date with a former patient.

The experience on Ward III was a complex picture. There were, of course, incredibly positive outcomes from McIndoe’s style of rehabilitation, and you will find these testimonies time and time again. In probing for details about the women who worked on the ward, there have been conflicting moral dilemmas to confront. It is my hope that it is both possible to reclaim these women’s experiences, whilst acknowledging the pioneering surgical and psychological innovations that occurred under Archibald McIndoe.

Your ticket for: Nursing at Queen Victoria Hosptial