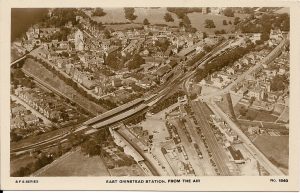 “Oh, Dr Beeching, what have you done?

There once were lots of trains to catch, but soon there will be none.

I’ll have to go and buy a bike, cause I can’t afford a car.

Oh, Dr Beeching, what a naughty man you are!”

Thus went the 1960s  ditty (from a popular song written in a much earlier railway age), penned in response to the hated railway closures of the time: about a third of the railway network , including the East Grinstead link to Three Bridges, lost in 1966 after 111 years.

The East Grinstead railway was originally funded by a group of local businessmen, after local train companies declined to build it.  The line to Three Bridges opened in 1855 and, by 1884, there were trains running to Tunbridge Wells and Oxted and, via Three Bridges and Lewes, to London.  Not bad for a little town of around 4000 people, albeit there were only 4 trains a day.

Dr Beeching established that 10% of the population owned a car, and that road haulage use was increasing, and this was presumed to be the future, gradually eroding railway use.  His 1963 report, accepted by the government, proposed the closure of all unprofitable lines, including 5000 miles of track and 2000 mainly rural stations, with a loss of 7000 jobs.

The means by which he decided which lines should go were widely believed to be flawed, but implementation began, leaving many rural communities stranded.   A further closure report in 1965 was not accepted, and Dr Beeching returned to ICI.

He was made a life peer later that year, and took the title Baron Beeching of East Grinstead, having moved to the town with his wife, Ella, some years before.  He died in March 1985 in the Queen Victoria Hospital.

Ironically, Britain today has a thriving rail network, the fastest growing in Europe, and busier than at any time since the 1920s.  And it is likely that, without the railway closures, we would not have seen the rise of heritage railways and, in particular, The Bluebell Railway, magnificently chuffing across the Hill Place Viaduct again.

With thanks to Dorothy Hatswell

Your ticket for the: NAUGHTY DR BEECHING, WHO AXED OUR RAILWAY