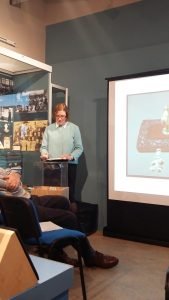 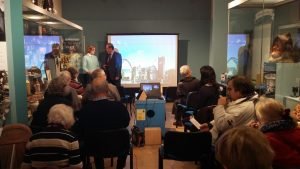 On Sunday 18th December, the museum’s last open day for 2016, East Grinstead Museum was delighted to be joined by Keeper of Musical Instruments, Margaret Birley from the Horniman Museum.

Margaret introduced us to the history of the Horniman Museum, which started life in Frederick Horniman‘s house in 1890, before being moved to a purpose built venue in 1901, the site it currently occupies.  Frederick Horniman was Chairman and Managing Director of the Horniman Tea Company, which has links to India.  However, Frederick didn’t visit India until 1894.  He returned from his travels with a number of objects, such as string and wind instruments as well as kettle drums.

The Horniman Museum has around 500 Indian musical instruments in its collection of over 9,000 instruments.

The Narsiga, made of copper and brass, was purchased in Amritsar, Punjab in 2006.  You can view the Narsiga at East Grinstead Museum until 21st March 2017.

The event was very enjoyable and we received some great comments:

Your ticket for: Margaret Birley shares her experiences of collecting Indian musical instruments