McIndoe was supported by a very able operating team, Jill Mullins, Theatre Sister and John Hunter, Chief Anaesthetist. Like Jill Mullins, John Hunter was a key member of McIndoes team prior to 1939 and was brought by McIndoe to the Queen Victoria Hospital to be part of the “Firm of Three”. 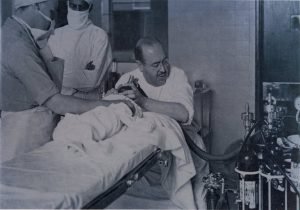 known as “The Knock-Out King”. A massive, ebullient expansive man, Hunter had a reputation as a “wizard with the gas works”. Not only was he highly skilled and efficient at what he did but he had a way with him that put patients into a coma long before he gave them drugs or injections. With plastic and reconstructive surgery, as multiple operations are often required, the anaesthetist plays a much more important part than he does in other branches of medicine. John’s hypnotically powerful personality, a deep and benign influence for soothing and comforting, lulled his patients into state of confident and painless trust. He was especially good with children making their operating experience into a game.

John Hunter was considered by some as outlandish as he preferred to wear a white coat over his civilian clothes and refused to wear a surgical mask or cap for fear of looking like a “continental chef”. In his work, he was imaginative as well as jolly and human in his approach. Before each operation, the good-humoured Hunter would make a bet with the Guinea Pig that if he were sick after coming around then he would buy him a beer.

Geoffrey Page, one of the Guinea Pigs to write about his experiences, recalls after he was wheeled into theatre: “Figures bustled around, and words were exchanged in hushed voices. Suddenly the relative silence was broken by a hearty voice exclaiming, “Well, and what have we got here?”

The rotund figure in its white theatre gown appeared more like a pork butcher than and anaesthetist. Above the large paunch was a friendly face consisting of chubby cheeks, double chin, rimless glasses and a small moustache. A few wisps of hair failed to hide much of the bald skin on his head. “I’m John Hunter, better known as the Gasworks,” he added cheerfully. “Which
Reminds me, have you heard the story of the girl called Virginia…?” Giggles from the other occupants in the room attested to Doctor Hunter’s popularity as a storyteller. The yarn failed to interrupt the anaesthetist’s work and as the story enlarged so did, he continue with his preparations. He worked with great efficiency and as he inserted a large needle into my arm, he said cheerfully, “Just a little prick, if you’ll pardon the expression.” This expression was John’s catch phrase.

Between them McIndoe and Hunter made giant strides in establishing a new relationship between surgeon and anaesthetist. McIndoe used to say, “I couldn’t have accomplished what I have done without his help. I’ve seen no one to touch him as an anaesthetist.” No longer viewed as a mere technician, through his contact and support with the patients he came to play a fundamental role in achieving McIndoe’s objective of patient’s fully functional return to the community. As part of this post-operative care John Hunter, McIndoe and Jill Mullins often went drinking with the men. Whilst McIndoe would play the piano at the bar, John Hunter would sort out the drinks and tell his risqué stories. 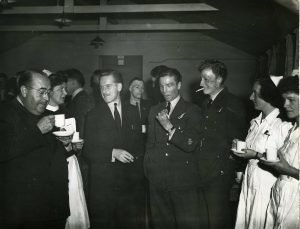 Hunter had a house in Ashurst Wood and he often cooked for McIndoe. John had a way with the shopkeepers and McIndoe gave Hunter his ration book to make the most of the scanty food. During the Battle of Britain air battle, the Hunter household became a rendezvous for bombed-out doctors. McIndoe often went there in the evenings and John, who received a triple ration of food as a diabetic, not only shared it with his guests but he became a good cook transforming the meagre and uninteresting fare into excellent meals. As well as being known as the most generous man in East Grinstead, he could drink any Guinea Pig under the table and McIndoe often had a private arrangement with publicans in the town that when he asked for a gin, he was given harmless tonic water. John was a great socialiser but always kept a clear head for the morning to start work on McIndoe’s list. Renowned for his dry, sharp wit, his side-shaking laugh and open-handed hospitality, he was generally viewed as being more popular than McIndoe.

When the Guinea Pig club was set up, to perpetuate the comradeship and support both patients and staff had found during their time at East Grinstead, John Hunter, as a key member of the McIndoe’s medical team was invited to join as a committee member.

John Hunter and McIndoe continued to work together after the war but started to have professional differences in the 1950s. McIndoe was keen to introduce low blood pressure anaesthesia but John Hunter was one of the many dissenters. He felt it put the patient’s life at greater risk and refused to use the new “dry method”. This conflict with McIndoe, his chronic diabetes and the pace at which he lived combined to affect Hunter’s health and he gradually became too ill to work. Colleagues gave him his insulin injections and to the end, he put a brave face on things, still joking and made no complaint about his treatment by McIndoe and his infrequent visits. 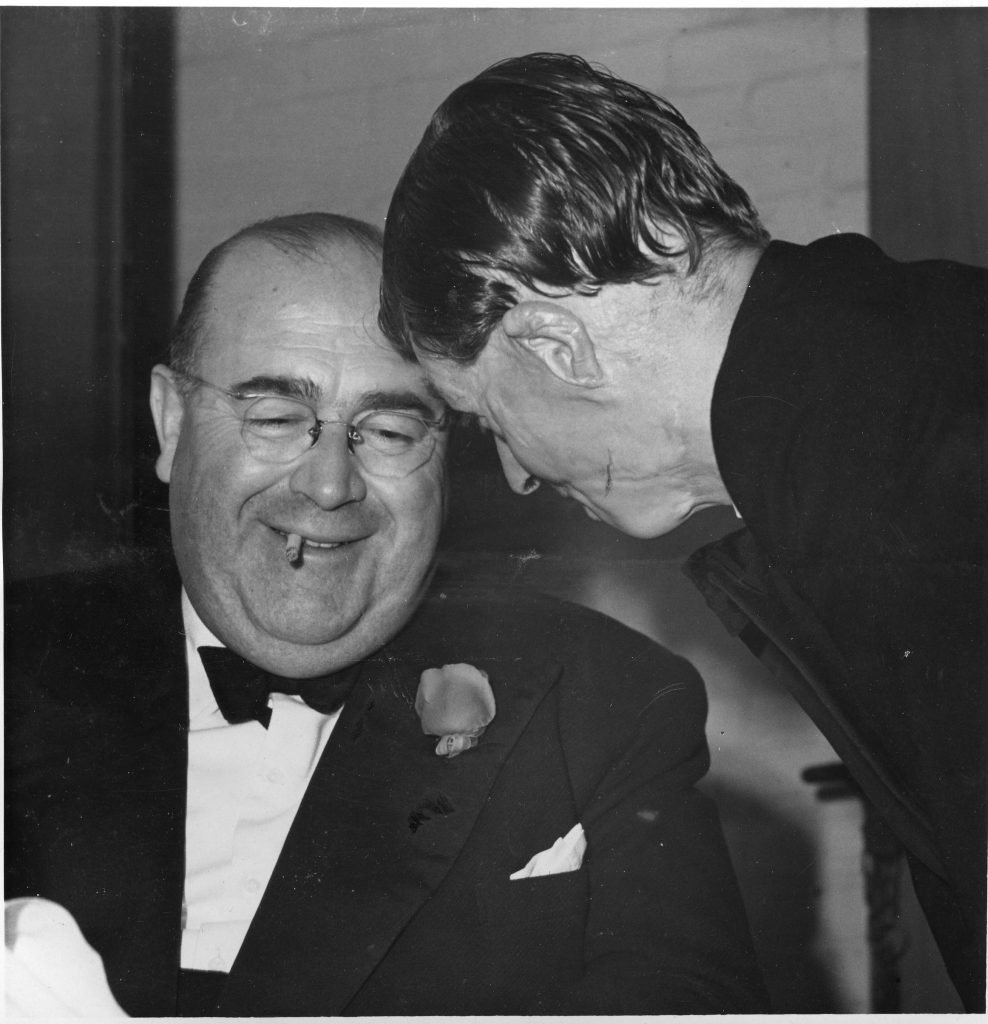 The day John was buried the whole hospital stopped and all his colleagues turned out to attend his memorial service at the local church. Buried at Mount Noddy cemetery neither Jill nor McIndoe were there. McIndoe was in the south of France and Jill could not attend. “Poor John,” wrote Archie to one of his Guinea Pigs, Bob Wright, who had written to commiserate with him.

“Unfortunately, I was in Cannes when it took place and did not myself hear about it for some days owing to the strike of post, telegraph and trains. I think everyone is relieved now that this terrible year has ended”. Although they had drifted apart in John’s final two years McIndoe proved himself a real friend after John’s death helping his widow to straighten out the woeful financial mess he had left behind.

Several Guinea Pigs attended his funeral. A spray of cream carnations from the Guinea Pig Club lay on his coffin and a card bade farewell and carried a message, which reflects the fond relationship between the Guinea Pigs and their beloved Pass out King: “In loving memory of and with great regret of Our John of the enormous heart, from Guinea Pigs all over the world.”

Years later at the Guinea Pig Annual Reunion Dinners his memory was honoured. At these dinners, three pictures were always on display, one of Sir Archibald McIndoe, one of Dr. John Hunter and the third of Jill Mullins, the Theatre Sister. The working rapport of the magnificent trio were always remembered annually in the ritual dinner toast “to Archie, John and Jill”.
John Hunter is also immortalised in the Guinea Pig Anthem, which was always sang every year at the reunions: –

We are McIndoe’s Army,
We are his Guinea Pigs,
With dermatomes and pedicles,
Glass eyes, false teeth and wigs,
In addition, when we get out discharge
We’ll shout with all our might:
‘Per adua as astra’,
We’d rather drink than fight.

John Hunter runs the gas works,
Ross Tilley wields a knife.
And if they are not careful
They’ll have your ruddy life.
So, Guinea Pigs, stand ready
For all your surgeons’ calls;
And if their hands aren’t steady
They’ll whip off both your ears.