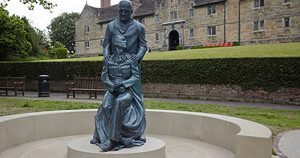 As part of the Guinea Pig Club’s 80th Anniversary in 2021, Bob Marchant, the Secretary of the Club, looks at the many ways the Club is commemorated.

As we are now entering the year 2021 , it will see the 80th Anniversary of the Guinea Pig Club, the club which was formed by a group of Allied Airman, who were suffering from Burns or other crash related injuries whilst being treated at the Queen Victoria Hospital, East Grinstead.

Looking back over the years, many tributes have been payed to honour the members of this unique club, not only by the people of East Grinstead, but by the town itself.

Reflecting on just a few, we find places such as the Queen Victoria Hospital, who in the year 2000 commissioned a local sign writer to design a Roll of Honour naming the 649 members, which now hangs proudly on the wall within the Canadian Wing. Alongside this, the hospital paid tribute by naming their main beverage & food outlets after Second World War planes, such as The Spitfire Restaurant, and the Hurricane & The Lancaster Lounges.

In the town itself, there is St Swithun’s Church, where some of the members were married, & for many years the annual service was held during the reunion weekend. there is a stained glass window incorporating the Guinea Pig Logo. There is also a memorial tablet dedicated to the club’s cartoonist, Henry Standen & his fellow Guinea Pigs, and in the small chapel, to the left of the main altar there is a chair in memory of  Chief Guinea Pig Group Captain Tom Gleave.

The local council have also been very supported by naming Streets, Roads & Buildings in East Grinstead in their honour, especially on the estate opposite the hospital in Holtye Road. The Urban District Council, and then the Town Council have generously hosted from time to time special events & reunions at East Court. They are now custodians of the statue to Sir Archibald McIndoe which was unveiled in June 2014, standing outside Sackville College at the entrance to the town, on what is now known as The McIndoe Lawn.

The Town Museum itself, who in 2015 established an exhibition named “Rebuilding Bodies & Souls“, showing the story of both McIndoe & the Club,  since becoming the club’s own museum now holding many records & artefacts for the future generations.

Over the years many social events & visits were arranged or hosted by organizations, private firms  or individuals, which were always gratefully appreciated by all who attended. Equally, a key role has been played by the RAF Benevolent Fund who help with the welfare of the members in times of need.

Now sadly, as the years pass by,  and as the numbers of  members get fewer, the club will still be remembered in many ways, from the Statue of Sir Archibald in East Grinstead, the Memorial Stone in the National Arboretum in Staffordshire , to the Town’s own Museum, but by the many places which have been named in their honour, also the people themselves of East Grinstead, within the town they regard as “theirs ”

Secretary of the Guinea Pig Club

A Trustee of EG Museum

Your ticket for: Tributes to the Guinea Pig Club