Sadly one of the last surviving members of the Guinea Pig Club recently passed away.

Flg/Off Woolf suffered severe injuries when his Lancaster Bomber was shot down over Northern France on 25th July 1944. After being taken as a Prisoner of War, he was treated by the Germans at the Nancy Hospital. When he was released, Woolf was transferred to RAF Hospital Wroughton on 25th September 1944, then subsequently arriving at the Queen Victoria Hospital on 5th December 1944. Here, he underwent seven operations to repair the injuries on his foot and ankle which had developed gangrene.

A private funeral was held on 6th May 2021, under COVID restrictions, at Sutton Coldfield Crematorium. 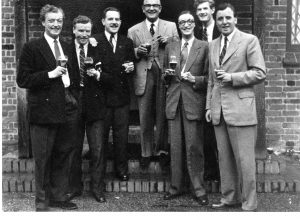 Woolf (third from left) with other members of the Club.