The Forgotten Story of Benjamin Rycroft

Whilst many people are familiar with the work of Archibald McIndoe within the field of plastic surgery, few people are aware of part that East Grinstead plays within the history of eye surgery, especially with the setting up of eye banks.

The most important person behind this story was Sir Benjamin Rycroft, who worked at the Queen Victoria Hospital after the end of the Second World War. Rycroft was born in 1902, and trained as an ophthalmologist (a doctor who specialises in working with the eyes). When war broke out in 1939, he joined the Royal Army Medical Corps, serving as an adviser in ophthalmology to the Army in both North Africa and Italy.  For his work during the war he was awarded an O.B.E. 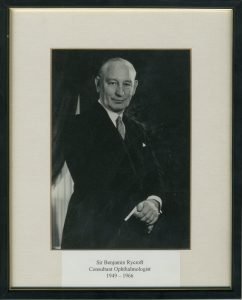 By 1949, Rycroft started working in a new Corneo-Plastic Department at the Hospital, which was set up with ten beds and an Ophthalmic Sister to assist with his work. Despite the increased publicity for his work, Rycroft was affected by a lack of donors for any procedures largely due to restrictive laws on the donation of body parts for medical purposes. These laws placed the decision for donation with the person’s next of kin, ignoring the donor’s wishes, as in law, the dead body has no property.

The beginnings of the Campaign

On 11th December 1951, a meeting was held at the hospital, which included local politicians from both major parties. to hear Rycroft and Sir Archibald McIndoe talk about the need for donor eyes for the unit. Rycroft was quoted as saying “We have all the facilities we require here at this hospital, but there remains a problem of donor eyes; our list grows week by week”. Immediately after the meeting, a campaign designed to raise awareness and change law was launched. Named the “Sight for the Blind” Campaign, it worked with the Women’s Voluntary Service to distribute forms to people who wanted to have their eyes for corneal grafting. Anyone who signed up received a card signed by McIndoe. 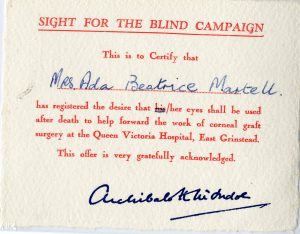 The publicity from the meeting, and the campaign led to the creation of a private members bill in Parliament in May 1952, and by September it had become law. This removed much of the legal problems for people wishing to donate their eyes for medical reasons. It also set up Eye Banks to help store and use these donated eyes, and the first was set up at the Queen Victoria Hospital. In fact, it is widely remembered by Hospital staff that a train carriage, containing the donated eyes used to arrive in East Grinstead Station and were taken by taxi to the Hospital. 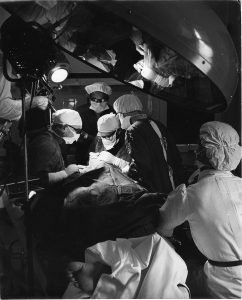 An image of an operation in progress with Sir Benjamin Rycroft operating.

Corneal shovel designed by Sir Benjamin Rycroft. Used for transfering the cornea disc from donor to patient after the removal from the donor eye during cornea transplant surgery. 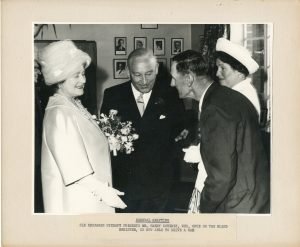 A copy of the Memorial Service Programme for Sir Benjamin Rycroft, which was held at St George’s Chapel, Windsor on 2nd May 1967

This story was told using research from the Museum’s collections. To see more of the collections, and to find out more forgotten stories, please visit our online collections.

Your ticket for: The Forgotten Story of Benjamin Rycroft

The Forgotten Story of Benjamin Rycroft