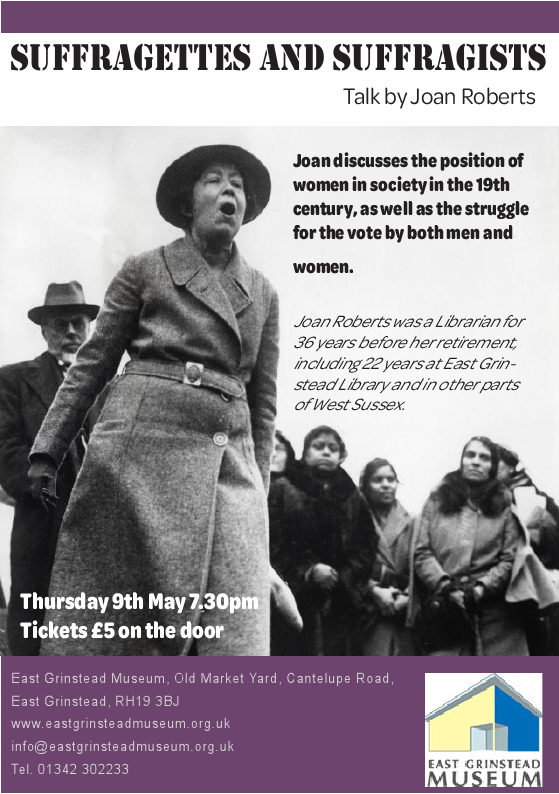 In her talk, Joan covers the position of women in society in the 19th century, as well as the struggle for the vote by both men and women; the founding of the Suffragists, who predated the Suffragettes, and the increasingly violent and bitter fight for the vote in the 20th century.

The work carried out by women in the First World War played an important part in the capitulation of the Government and the inclusion of votes for (some!) women in the ‘Representation of the People Act’ in 1918.

Come and hear the story of this epic struggle and decide for yourself – would you have been a Suffragist, a Suffragette or would you have chosen not to take part in the battle at all?

To reserve a place, please register your attendance using the book now button.  The price will show as £0, however there will be a £5.00 charge on the door.

Joan Roberts was a Librarian for 36 years before her retirement, including 22 years at East Grinstead Library and in other parts of West Sussex.  She is a life-long Library enthusiast and has worked in College Libraries, as an Information Librarian in an Industrial Training Board and as a Children’s Librarian in London. She believes that libraries still play an important part in their communities, as they are uniquely placed to bring together all ages and to provide services for them all.  She has an interest in social history – especially that of libraries !  Joan is an enthusiastic member of the East Grinstead Society and the Friends of Sackville College. Her hobbies are gardening, embroidery and (surprise !) reading.

Your ticket for: Museum Talk: Suffragettes and Suffragists by Joan Roberts