Katie Kettle has written as blog about the history of EG Target Shooting Club which is published on their website. She gives us a permission to reproduce it for our blog.  http://egtsc.co.uk/page/history 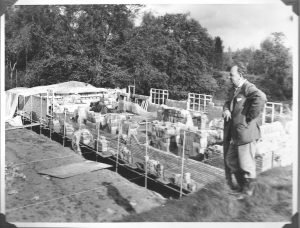 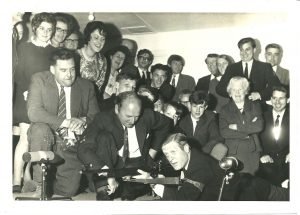 A well earned break during construction of the perimeter wall of the outdoor range.

Today East Grinstead Target Shooting Club has its range on the edge of East Court, a park not far from the centre of town. The facilities, which include three ranges, seating areas, a kitchen, and toilets, are the best in the county. But it took many years for this to come to be.

EGTSC started life as the Felbridge Home Guard Rifle Club in 1945 not long after the end of the Second World War. As is evident in the name, its members were primarily those from the local Home Guard units and many other clubs were formed in the same manner at this time. They did not have premises of their own but did have use of the range at Hobbs Barracks in Lingfield. This lasted until 1948 when a new unit was assigned to the barracks and the privileges for the Club were revoked. For the next two years, club members had to travel to Crawley to shoot their league cards.

Over this period, work started on a purpose-built clubhouse and indoor range. Land for this building was bought on Imberhorne Lane, with the aid of a loan of £1,000, and construction was completed in 1950. As the years passed, the facilities struggled to cope with the growing needs of what was now Felbridge and District Rifle Club. In 1965, the land was sold off for industrial development and the funds allocated to building a new clubhouse that would cope with the future needs of the Club.

Lingfield and Dormansland Rifle Club generously offered up free use of their range on Friday and Saturday nights for Felbridge members and these facilities were used for the next three years. Eighteen months in, after lots of preparatory work, an application for land was sent to the War Memorial Fund and F&DRC was allocated some land on the edge of East Court.

Over the next two years, the current clubhouse was built. At the head of the project was Charles Beard, founder member and Vice-Chairman of the Club. All told, the building effort cost £6,000, significantly reduced by the labour volunteered by Club members that enabled the skilled bricklayers and other professionals to do their jobs faster.

The new clubhouse and 25yd range were officially opened on 25 May 1968, by Geoffrey Johnson-Smith, MP for East Grinstead. In the traditional manner, he took one shot at a target on a gold plate. Prior to taking the shot, he warned the club members looking on to be wary of his aim due to lack of experience, then proceeded to score a bull.

In his speech at the ensuing celebration, Gwynn Powell, founder member and Club Chairman, said they hoped to have the outdoor range open within the next 18 months, along with an indoor standing and kneeling range. The outdoor range was duly opened, partially funded by a grant from the Ministry of Education and Science, and again aided by the labour of club members. The members obviously did a good job; the Clubhouse and facilities remain one of the best in the South East.

In the meantime, F&DRC shot 50 and 100yd competitions at a range at Chailey Brickworks, 15 miles south of East Grinstead. It was here that they made contact with members of Uckfield Rifle Club which led to Uckfield renting the use of the East Court clubhouse on Monday nights for many years.

The standing and kneeling range was never built and has limited the club’s activities at the international level where standing, kneeling and prone shooting are the norm. The club was renamed Felbridge and District Rifle and Pistol Club in the 1980s as the membership converted the committee room into a 10m/6yd air range for air pistol/rifle shooting and had aspirations to expand further, with the construction of a live fire pistol range which would incorporate the standing and kneeling rifle disciplines. This project was curtailed by the changes in legislation in 1989.

The club underwent another name change in 1994, when it became East Grinstead Target Shooting Club, acknowledging that it had resided in East Grinstead for longer than it had in Felbridge. This also made it easier for prospective members and visiting shooters to find the club!

(Compiled by Katie Kettle from information in the club archives)

The City of London Cup, which East Grinstead teams have won for three of the last four years, including last weekend (27th April). The competition is open to clubs nationwide.   (In the background are the prize’s for EGTSC’s April Open Shoot.)

Your ticket for: A History of East Grinstead Target Shooting Club